Home » FTB NEWS » The grass gets “Greener” in Detroit 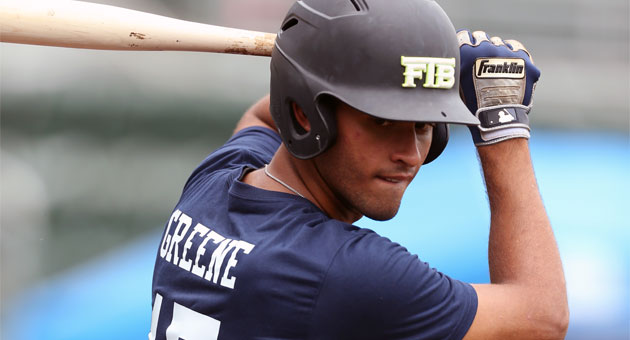 Years ago, Riley Greene’s dad, Alan, played on the fields of Tiger Town in the central Florida, semi-professional Lakeland Highlands Babe Ruth League. Alan never made it to the pros. But his son someday should, and will sooner play on those same fields, as a Detroit Tiger. With the No. 5 overall pick in the 2019 MLB draft, the Tigers selected Greene, a high-potential prep outfielder from Hagerty High School in Oviedo, Fla. Greene is considered the best prep bat in this year’s draft. In his senior season at Hagerty, he hit .422 with eight home runs and a .550 on-base percentage. Greene is ranked by Baseball America as the No. 5 overall prospect. He stands 6 feet 2 and swings left-handed. According to Baseball America’s scouting report, Greene is “The best pure hitter in the prep class. “Entered the 2019 draft cycle as one of the most highly regarded bats and he has done nothing to dispel those notions during high-profile events throughout the summer and into the fall. “He’s hit top-level pitching so consistently that some teams have pegged him as a future 70-grade hitter, which is rare for prep bats.” By drafting Greene, the organization went in the direction that many expected, going with offense at the top of an offense-heavy draft. Greene is their first position player drafted in the first round since Christin Stewart at No. 34 overall in 2015 and first prep position player drafted in the first round since Derek Hill at No. 23 overall in 2014. Greene’s selection comes with risk and reward: As a prep player, he will face a tougher learning curve, heading to the professional ranks at age 18, years before college players will. “We’re certainly happy that a player with so much offensive potential was available for us with the fifth selection,” GM Al Avila said in a statement. “We’re looking forward to Riley joining our growing group of young position players that are moving quickly in our system during their development towards the Major Leagues.” Once signed, Greene will become one of the Tigers’ two highest-potential offensive prospects, along with Double-A Erie third baseman Isaac Paredes.