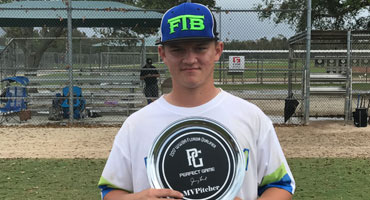 Evan Michelson is a 2018 graduate from Mandarin High School in Jacksonville, FL. Evan has been with FTB since the age of 13 years old. Evan was known by his teammates, as one of the elite arms that always gave his team a chance to win the game. Evan had a tremendous outing at the WWBA National Championships in Jupiter this past fall where he retired all 6 batters he faced, striking out 4 and topping out at 92 mph with his fastball. Evan says, “he always had great stuff, colleges just wanted to see me work to get my velocity up.” Typical Evan took this advice and worked his tail off to get stronger. Coach Sindone is quoted in saying, “Evan is a kid that gets the job done and works harder than most. Probably the most impressive thing is he hasn’t lost his pitchability as he made that velo jump.” Evan will be attending Chattahoochee Valley Community College in Phenix City, AL.