EMERSON, Ga. – The 17u WWBA National Championship came to a close this afternoon as the No. 1 overall seed FTB Tucci dispatched the South Charlotte Panthers 7-3 to claim the 2016 title. Tucci struck early and often on offense to roll to a win that was never really in doubt.

The Panthers struck first as they pushed across a run in the first inning without recording a hit. After getting runners to first and second with a hit by pitch and a walk, respectively, a double play ball was hit to short. The runner beat out the throw at first and the runner who was on second made a smart base running move and scored on the play.

The Panthers responded to tie the game in the top of the second. Justin Guy, the No. 11 outfielder in the state of North Carolina for the class of 2017, came through with a clutch, one-out RBI single to tie the game heading into the bottom of the inning.

Emotions were high for manager Jered Goodwin as he had come very close before and reached the top of the mountain against a very competitive field.

“It’s unbelievable,” said Goodwin. “This is a great group of kids. We have so many different personalities that came together. I talked about it the other day that it was going to come down to chemistry and finding leaders and we certainly did. The chemistry was unbelievable. I knew this is what it was going to take and it was a real program effort today with some young guys throwing. It was a really good day for our entire program. We hope every time we step on the field we make our founder George Gonzalez proud. He was the one who started this all and we’re lucky enough to represent him and FTB. Also a big thanks to our sponsor Tucci Lumber.”

Goodwin talked previously about how he felt team chemistry and the emergence of leaders in the dugout were going to be the biggest factors in how far the team would go. He was clearly impressed by his team’s ability to step up in moments and grind out tough victories.

“The first couple days we weren’t communicating and our dugout was really dead,” added Goodwin. “Then all of a sudden some guys stepped up and one guy in particular Bryce Hutchinson. After that it was all of our pitchers, all of our infielders, all of our outfielders, and our catchers. This team became this new club that was exclusive, and that’s the stuff that sounds weird but all of a sudden you start fighting for each other. It was awesome to see it evolve like that.”

FTB Tucci orchestrated a systematic comeback after going down 4-0 early in the semifinals. Goodwin was proud of his team’s ability to overcome the adversity and grab victory from the jaws of defeat.

“It’s weird, you go down 4-0 and we were down 4-0 in the semifinals in 2010 and we ended up putting a bunch of runs up right away and went to the finals,” said Goodwin. “This year it was different, it was kind of a grind, we were flipping lineups and running the bases well. We just had to get those big two-out hits and grind at-bats. I didn’t think it was ever too high or too low, I think we just knew we had to keep grinding and chipping away and it went in our favor in the end.”

Goodwin wants his team to remember not only the championship trophy, but the journey they took to get there. Building relationships and creating lifelong memories are the biggest things that he wants his team to take from the tournament.

“I told them a couple nights ago how many former players in the pros have texted me this week saying they were following on GameChanger,” said Goodwin. “That is what you take away from these tournaments are these lifelong friendships. They want to look back and they want to see how everyone is doing. Literally three big leaguers told me they were following on GameChanger and these guys aren’t going to get it now, but they will in a couple years. This is special. Take away the championships and they’re building relationships and that’s what’s going to help them heading into life and their baseball careers.”

The MVP of the tournament was Conner Uselton, the No. 3 outfielder nationally for the class of 2017, of FTB Tucci. Uselton finished with a tournament high 16 hits, a .457 batting average, and added eight runs and eight RBI. The MV-Pitcher was James Decker, the No. 26 righthanded pitcher in the state of North Carolina for the class of 2017, of the Panthers. Decker finished with a 2-0 record in 8 2/3 innings pitched and struck out eight batters while only allowing only one run. Decker also started and won the semifinal game for the Panthers.

The Panthers reached the championship game after a dominating 10-2 victory over Elite Baseball Training. The Panthers scored multiple runs in three innings, including a five-run first inning, to pile on often and soundly to defeat Elite Baseball Training. Conner VanCleave, the No. 1 lefthanded pitcher in the state of Kansas for the class of 2017, led the way on offense as he went 2-for-3 with one run scored and three RBI.

FTB Tucci defeated the Home Plate Chili Dogs Maldonado 6-5 in extra innings to advance to the championship game. FTB went down 4-0 in the first inning and clawed their way back to tie the game at five apiece in the sixth. Christian Robinson brought home the winning run in the bottom of the eighth with a walk-off RBI single off the right field wall. 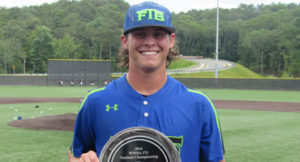 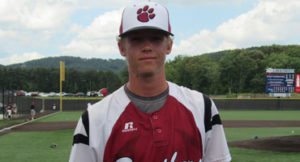