FORT MYERS, Fla. – A dominating weekend run resulted in FTB Tucci 55 punching their ticket to the main event in Jupiter. FTB clinched their spot with an 8-1 victory over Coastal Prospects 2018 in the WWBA Florida Qualifier championship game.

Entering Monday’s semifinal matchups, FTB and Coastal Prospects, much like they had done all weekend long, made short work of their morning contests, winning 9-0 and 8-1, respectively, to set up the title game.

“Coming off of the storms we’ve had, trying to get everyone together, it was hard to get a team in place,” FTB coach Julio Figueroa said. “We brought a lot of uncommitted guys we decided to bring out here to showcase their skills and a lot of them played really, really well and I was really proud of their effort all the way around.”

Coastal Prospects would get a run back in the top of the second, as Nick Niewulis (2018, Jacksonville, Fla.) led off the frame with an infield hit and came around to score on a fielder’s choice.

FTB would answer and push their lead back to three runs in the home half thanks to an RBI double to the left-center field fence off the bat of Jonziel Serrano (2018, Orlando, Fla.).

In the fifth, FTB put the game away with four runs, with Serrano getting things started with another double, part of a perfect 4-for-4 day at the plate for the FTB outfielder.

“He was unbelievable this week at the top of our lineup all week long,” Figueroa said of Serrano after the game. “He has great offensive and defensive skills, he’s a 4.0 student and just was outstanding with the bat this weekend.”

Tripp was hit by a pitch, and with two on and two outs, Warren lined a single to left to bring in Serrano to make it 5-1. A wild pitch would allow Tripp to score, and Warren would race home on the backend of a double steal to make it 7-1. J.J. Gonzalez-Molina (2019, Haines City, Fla.) made it a seven-run lead with an RBI single to left closing the scoring for FTB.

Francisco Mateo (2018, Montverde, Fla.) closed out the seventh, striking out a pair of batters to send FTB off with a spot in the WWBA World Championship in Jupiter to be contested starting on October 19.

“A lot of these guys are very, very deserving to go to Jupiter, we’ll be sending two teams with as big as our organization is,” Figueroa said. “It’ll be tough to decide who will get to go, and guys made a big push to get on those rosters.”

Tripp was named the Most Valuable Player for the tournament, batting .533 (8-for-15), with two doubles, three triples, a home run and nine RBI. 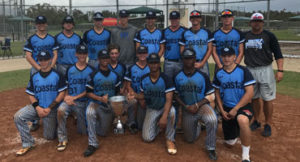 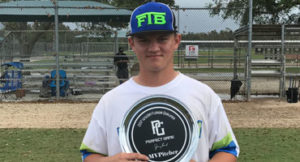